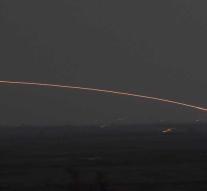 damascus - Syrian state media report that the government army has intercepted Israeli missiles. That would have happened in the vicinity of the airport of the Syrian capital Damascus.

'Our air defense systems have thwarted Israeli aggression with missiles,' said Syrian military sources against the SANA state press agency. A spokesman for the Israeli army did not want to respond to the Damascus message.

The Israeli Air Force has in the past bombarded numerous targets in Syria, where civil war has been going on for years. The regime of President Bashar al-Assad has now recaptured most of the country from insurgents. Assad received support from Russia and Iran, the arch enemy of Israel.