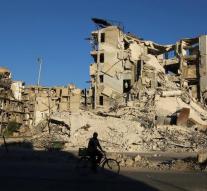 - The Syrian government is willing to forming a government of national unity. This said the foreign minister, Walid al-Muallem Monday against the Lebanese news channel Al-Deen Maya. According to al-Muallem has \'political roadmap\' to the government in Damascus who can help put an end to the five-year protracted bloody civil war.

However, there would first have to be a referendum on a new constitution and parliamentary elections. Al-Muallem said that the armistice that Moscow and Washington have drawn earlier this month, is still on the table.

The government, according to state news agency SANA on Monday in a western city of Homs 250 rebels or relatives of the fighters let go. The evacuation in al-Waer, approximately 130 kilometers north of Damascus, is part of an agreement between the government and rebels.