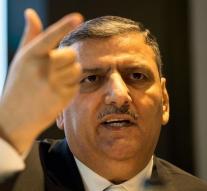 london - Opponents of the regime of Syrian President Bashar al-Assad on Wednesday in London launched a peace plan. By the Saudi Arabia-sponsored High Negotiation (HNC) wants to negotiate with Assad six months on the formation of a transitional government. During the negotiations, there must be a ceasefire. Assad after the negotiation phase step down and transfer power to the interim government. Which runs the country half years and organizes elections.

A top executive of the HNC, Riyad Hijab, the plan presented in London, the BBC reported. It's called Vision for Syria and outlines three phases of the negotiations, the transitional phase and the time of constitution and elections. Assad has set itself, as in previous similar initiatives negotiation, the position that he leads the legally elected government and the HNC can not demand that he resign.