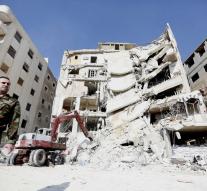 damascus - The Syrian government allows Muslim fighters in 2000 and 1500 by their families in the short term from an area in the south of the capital Damascus leave. The evacuation by bus is the result of an agreement between the government and the fighters of the Islamic State and the al-Nusra Front.

The negotiations about the departure of the extremists lasted quite some time and were conducted under the auspices of the United Nations. IS and al-Nusra agreed because the regime in Damascus had been able to isolate the fighters. They could hardly more to get food and other humanitarian aid. The Syrian government is now a stronghold of extremists, which is actually located just a few kilometers from the center of the capital.