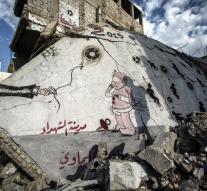 - The Syrian government has been guilty of a third attack with poison gas. It would appear from a confidential investigation report of the United Nations and the Organisation for the Prohibition of Chemical Weapons (OPCW).

Syrian forces would have attacked on 16 March 2015. The place Qmenas in Idlib province with poison gas The report, seen by Reuters Friday, is intended for the UN Security Council. There is expected to erupt again a diplomatic conflict between Russia and China and the Western members of the council on setting up possible new sanctions. Moscow supports Syrian President Bashar al-Assad in his fight against rebels including air strikes.

It is the fourth report of the thirteen-month investigation by the UN and the OPCW established in The Hague. The third report was Damascus accused of attacks with chlorine gas on April 21 2014 and March 16 2015 Warriors of the terrorist group Islamic State would have been guilty according to the report of attacks with mustard gas.