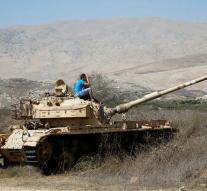 - "The Syrian army claimed Tuesday an Israeli fighter plane and a drone from the air to have shot."

"The Israeli army has not yet responded to the claim."