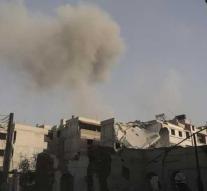 beirut - Damascus demanded the departure of Turkish soldiers from Afrin on Monday after they had conquered the largest city in the region on Syrian-Kurdish forces during the weekend.

'The Turkish government leader's announcement that his invasion troops control Afrin is illegal,' wrote the Syrian Foreign Ministry in a letter to the United Nations. 'Syria wants the units that have invaded to withdraw immediately from the areas they occupied. '

Earlier in the day, Turkish president Erdogan said he was going to drive out the 'terrorists' of the YPG in northern Syria, starting in Manbij. He regards this Kurdish militia as an extension of the banned Turkish PKK. Erdogan's Deputy Prime Minister Bekir Bozdag had just promised that the Turkish soldiers would leave Afrin to return the area to the 'real owners.' '