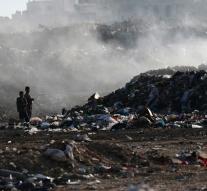 - US and Russian foreign ministers, Sergei Lavrov and John Kerry, each speaking Thursday in Vienna on the civil war in Syria. It is an introduction to the international Syria- consultation is scheduled Friday in the Austrian capital. Kerry has arrived Thursday morning.

The concert will take Friday major powers who support Syrian President Bashar al-Assad and fight together. It is for the first time in January and February 2014 in Montreux and Geneva by the United Nations, an attempt was made to the bloody civil war diplomatically to defuse.