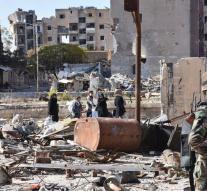 aleppo - Syrian government forces on Tuesday pushed further into the occupied area of ​​Aleppo rebels. According to the Syrian Observatory for Human Rights comes from Aleppo recapture getting closer.

The drift away from the insurgents out of the last areas in eastern Aleppo was the most important victory of the army in the five-year civil war.

From the rebel camp messages about possible surrender still denied emphatically. Also, the intrusion of government forces would not have been at issue. But they try to invade the territories and the struggle still going on.

Russian Foreign Minister Sergei Lavrov said Tuesday evening or Wednesday morning with the US talks about the withdrawal of rebels. The rebels supported by Russia have lost the last few weeks, two thirds of territory in Aleppo.