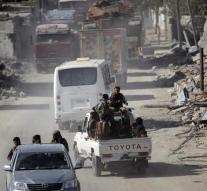 - The Syrian army rebels in Aleppo summoned to lay down their weapons and leave the northern city with their families. All of their positions and stockpiles are precisely mapped and who let go the opportunity to leave will undergo its 'inescapable fate.'

Previously announced to reduce the army to the air strikes on the eastern districts, so people can go.

The army began an offensive on September 19, after a cease-fire a week had expired. It was thereby support of Shiite militias in Iraq and Lebanon, and the Air Force of Russia, the offensive opened with one of the heaviest bombardments of the five and a half years of war.