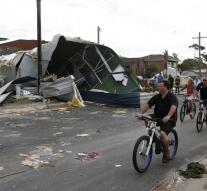 sydney - Sydney, Australia on Wednesday surprised by a rare tornado. The whirlwind with speeds above 200 kilometers per hour and hailstones as big as tennis balls left a trail of destruction.

Because of the storm interacted trees fell power lines broke, flew roofs of houses and cars to beat. In thousands of households the power went out. To our knowledge no one was injured.