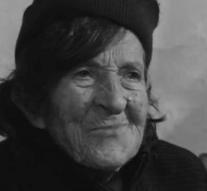 - The last Montenegrin who went through life according to a centuries-old use as a male family head is deceased Monday. With the passing of the last of virdzina's Stana Cerovic, also extinct tradition.

Cerovic promised her father, like all virdzina for her, as a man to live and never get married. They thus received access to the traditional man's world in the Balkan country, was in her men's clothing welcome to the coffeehouse, if smoking and carrying a firearm. Those privileges had a price: Cerovic also had to carry the heavy work was reserved for men in the Balkan country, The Guardian wrote earlier.

The remarkable patriarchal tradition assured that the family still lived on another generation. But with the death of the virdzina hit the last hour of the male line, by definition yet.


Cerovic, who was born in 1936, lived much of her life on her own in a village in the inhospitable north of Montenegro. Her last days she wore against her in a nursing home, Montenegrin media report.