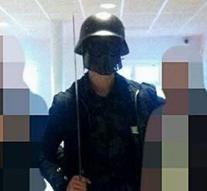 trollhattan - The man Thursday in the Swedish place Trollhattan killed two people, was driven by racist motives. That the Swedish police announced Friday.

The 21-year-old perpetrator, who was shot by police, died later that day in hospital. He stuck a sword in a school with a teacher and a 11-year-old student died. Another teacher and another student were injured. According to police, the man had no criminal record.

In the home of the perpetrator in Trollhattan police found items indicating racism. The choice of his victims would indicate that.