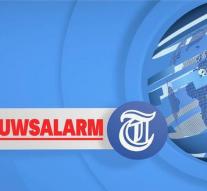 geneva - Two Swiss teens died on Friday when a plane crashed on the camp where they stayed. The pilot also came over. A third teenager became severely injured.

Earlier this week, a 56-year-old man arrived and an 8-year-old girl died when an airplane made a landing on a beach not far from Lisbon. The two Portuguese were sunbathing when they were surprised by the plane.

This article concerns news in development and will be complemented.