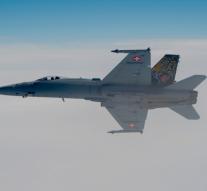 susten - The body of the Swiss pilot, who Monday with his fighter plane crashed in the Alps, was found by rescue services.

The pilot crashed his F / A18 device during a workout down Susten over the small town. The day before the wreck was found, but this morning it was announced that the body was found.

Earlier this year plunged an F-5 with a stunt team of the Swiss Air Force down in Friesland, when Bitgum town. The stunt team was in the Netherlands for a demonstration flight during the Air Force Days.