Home / World / 'Swiss glaciers are no longer to be saved' 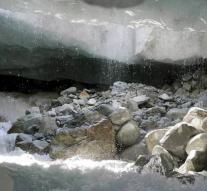 - Due to temperature rises, the glaciers in Switzerland can no longer be saved. Even with the greatest efforts to reduce CO2 emissions, about 90 percent of the glaciers will melt by 2100, according to glaciologist Matthias Huss from the University of Zurich on Thursday in the Swiss newspaper Tages-Anzeiger.