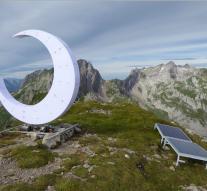 appenzell - A nearly three meters high crescent on a mountaintop caused uproar in Switzerland. It is a work of art by the Swiss Christian Meier who, incidentally planted without permission from the authorities, the crescent on the top of Mount Liberty in Appenzell.

Atheist Meier protesting thus against the many crosses that adorn other peaks in the Alpine region. The large crescent at 2140 meters altitude is lit at night. But many residents artwork is an eyesore That is the epitome of brutality. A boundless mess, hot.

The authorities in the canton of Appenzell Inner Rhodes have been called to pick up the work as quickly as possible the artist. The artist, who hails from Appenzell but mostly lives in China, responded laconically. ' I wanted to provoke and that did it. '