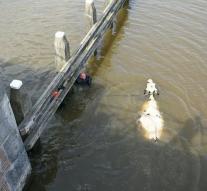 wetsinge - A swimming cow has taken a great deal on the fire brigade from Groningse Winsum on Monday afternoon.

The animal was supposed to drink water in the Reitdiep when it was misguided. Passengers saw the cow swim and switched on the fire brigade, upon which two firemen decided to enter the water. However, the cow did not easily catch and swam away.

The men eventually caught the cow, but the heavy animal had to be hoisted on the side. While the men tried to get the cow on the side, additional materials were collected on the barracks to get this together.

After one and a half hours the cow and the firemen stood on the dry.