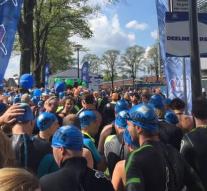 amsterdam - More than three thousand people dive Sunday in Amsterdam canals for the sixth edition of the Amsterdam City Swim. They swim, from the Naval Terrain to the Leaning Bridge at the Keizersgracht in 2017 kilometers to collect money for the muscular disease ALS.

Former footballer Fernando Ricksen, who himself suffers from ALS, gives the starting shot of the action. Participants clap for him. They join in to fight for 'disease'.

Beau of Erven Dorens swims more often in the canal. But now he does it for charity.

At the end of the afternoon, the final yield is known, but the counter is already over 1.6 million euros.

The amount is intended for research into the incurable and lethal nerve and muscle disease ALS.