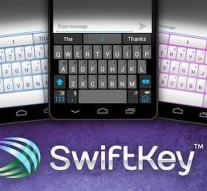 london - Keyboard app SwiftKey has e-mail addresses and telephone numbers of the users' phones leaked to others. That the company confirmed Friday after reporting by the British newspaper The Telegraph. The problem was in sync via the cloud.

The SwiftKey keyboard keeps for each user a list with your own words and terms at which much be typed. Which can be synchronized via the cloud so that the keyboard is fully functional on a new phone. In however synchronize got some users see the data of others which foreign words and sometimes even email addresses and phone numbers were provided as suggestions by the keyboard.

SwiftKey has temporarily turned off the synchroniseerfunctie and working on a solution. The British company, which is part since this year by Microsoft, suggests that only a small proportion of users had to do with the bug and the security of users' data have not been affected.


SwiftKey is available on both Android and iOS.