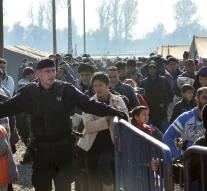 stockholm - The right-wing populist Sweden Democrats party has distributed leaflets in several countries in Europe under refugee to discourage these to come to Sweden. A spokesman said Monday that the leaflets were distributed in twenty locations in six countries.

The leaflet says that Sweden gives refugees no money, jobs and shelters. The massive arrival of refugees, the country would have become violent. In addition, it says that halal slaughter and wearing a niqab or burqa bans, which is incorrect.

" They create an image of Sweden that is not true ", said Swedish Minister for Migration, Morgan Johansson.

In the past week, 10,000 people applied for asylum in Sweden. Johansson warned last week that there is inadequate shelter for the refugees.