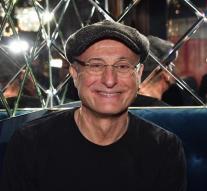 stockholm - Swedish actor Michael Nyqvist died on the effects of lung cancer on Tuesday at the age of 56. Nyqvist broke internationally thanks to the original Girl With The Dragon Tattoo movie series.

'With deep sorrow,' Nyqvists spokesman confirmed the death of the actor to various media. 'Our beloved Michael, one of Sweden's most respected and successful actors, has gone quietly in the presence of his family after a year-long battle against lung cancer. ''

In the filming of Stieg Larsson's Millennium Trilogy, Nyqvist performed the role of main character Mikael Blomkvist. He was seen next to Noomi Rapace in the Swedish TV series and the three subsequent movies.

The success of the films produced the Swedish international roles. For example, he was seen next to Tom Cruise in the Mission: Impossible-movie Ghost Protocol and played with Keanu Reeves in John Wick. In addition to actor was Nyqvist writer, in 2010 his autobiographical memoir appeared when Barnet Added Sig.