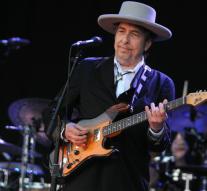 stockholm - The Swedish Academy hopes that Bob Dylan is coming to Stockholm next year the Nobel Prize for Literature to receive. The American singer-songwriter has let know that, because of other commitments is not in a position to travel to Sweden in December. The Academy, however, thinks he's in Stockholm, probably in the spring will give a concert, which 'would be a perfect opportunity to keep his Nobel Lecture.'

The winner has six months time to give his lecture. In what form- a written speech, a spontaneous tale, a movie or whatever- is the laureate himself, Secretary Sara Danius told Swedish public radio.

Dylan was awarded the Nobel Prize for his poetic creations in the American song tradition. He took two weeks before he gave a response, to the annoyance of some members of the Academy.