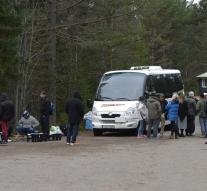 stockholm - Sweden has enlisted the help of the army to cope with the difficulties in accommodating the thousands of refugees. The government has major problems in registration and accommodation of immigrants.

Especially the housing is a major concern. The need is so high that some refugees have to sleep even on the floor of shelters. Since 2012 the centers are full. These shelter facilities operate with four times as many people as intended, employees that are also working double shifts. Especially there should bring military solution.

The Swedes, reports the British newspaper The Guardian, has to deal with a disproportionate amount of immigrants. One in seven refugees who reach Europe, moved to the Scandinavian country. This year already 120 000 people have applied for asylum in the country. The treatment of such a request can take up to two years.