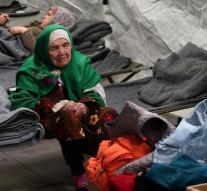 - The asylum application of 106-year-old Afghan Bibihal Uzbeki, 'the oldest refugee in the world', has been rejected. The Kunduz woman laid down a journey of thousands of kilometers two years ago to finally seek asylum in Sweden.

Uzbeki was interviewed by international media in 2015 in a refugee camp in Croatia, after which it became known as 'oldest refugee'. It was a heavy trip to Sweden, her son and grandchildren carried the woman. During the ride she fell and wounded her head, the woman told her. In Germany, Uzbeki eventually got a doctor's wheelchair.

In Sweden, the Afghan family hoped to get asylum, but that year as many as 163,000 people asked asylum in the Scandinavian country. Sweden has since had a stricter asylum policy. In June, the pregnant woman was told that she had to leave Sweden.

She was appealed against the decision.