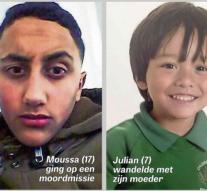 - Left Moussa Oukabir, right Julian Cadman. The one is 17 years and sat behind the wheel of the van, the other one was 7 beside his mother on the Ramblas. Moussa wanted to kill all the unbeliefs, Julian loved dancing. Moussa has been shot dead, Julian is trackless and is still being sought by his desperate father and grandfather, while the mother has bone fractures and head wounds in the hospital. These are two young faces of the attack in Barcelona. In the meantime, more and more names and portraits of perpetrators and victims are coming out.

The hard core of Barcelona's terrorist cell consisted of teenagers, so it is clear now. IS runs on his last legs, yet the boys were banned from the Islamic terrorist movement and her message of hate and death. It is worrying that the calming caliph seems to have such a fatal influence on young people, says Terrorist Jelle van Buuren of Leiden University. 'The ideology has not been lost yet. ''