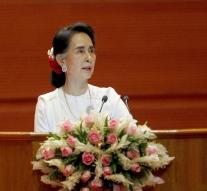 naypyidaw - After almost seventy years of bloody battles between all kinds of separatist groups Wednesday gave the initial impetus to the peace process in impoverished Myanmar. Foreign Secretary Aung San Suu Kyi opened in the capital Naypyidaw a four-day meeting with over 1700 delegates, accompanied by Ban Ki-moon, Secretary General of the UN.

Apart from representatives of the supreme army also pushed fighters from seventeen of the 21 armed secessionist movements to the negotiating table to. Part of it is still fighting in the border areas. Hundreds of thousands have been displaced from their homes.

,, This process was decades ago to take place, '' Suu Kyi, whose father suggested the minorities in the poly-ethnic country already promised democratic rights in 1947. Soon after he was killed. In the period 1962-2011 suppressed a military junta, the hopelessly divided population.,, We have before us a long way but the direction is promising, '' Ban Ki-moon told his audience.