Home / World / Suu Kyi does not go to UN meeting 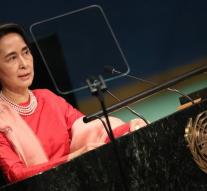 naypyidaw - The leader of Myanmar, Aung San Suu Kyi, does not go to the next UN General Assembly because of the crisis in her country. That has declared her office Wednesday.

Myanmar and Suu Kyi received international criticism because of ethnic violence, which has flown around 370,000 Rohinya to neighboring Bangladesh. The crisis has been the biggest problem so far since Nobel Prize winner Suu Kyi became government leader in the country.

The UN Security Council meets on Wednesday after closed doors about the situation in Myanmar.