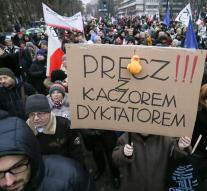 warsaw - Polish opposition leaders on Saturday called for a day long protest against the government. They themselves occupy the plenary hall in parliament, after adoption of a new press law, which limits access to the parliament for journalists.

Outside parliament the police early Saturday morning hit an anti-government demonstration down with tear gas. Only then could Szydlo Prime Minister Kaczynski and leader of the ruling conservative party Law and Justice (PiS), leave the building.

Thousands of Poles were campaigning during the day. They find it illegal for the government after the parliamentary capacity in a small meeting approved the budget for 2017.

The Polish EU Minister Donald Tusk called on the Polish government to 'respect the people and the constitution. 'He called democracy without media access' limited. '