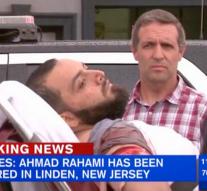 - "The US authorities have no reason to believe that the suspect has been arrested for the attack in New York, is involved in a terrorist cell."

"That said Andrew Cuomo, Governor of the State of New York, in an interview with MSNBC. By a stop in the entertainment district Saturday Chelsea were 29 people injured. The arrested man was involved in a bomb attack in New Jersey on Saturday."

"Rahami would have studied law according to US media before he quit his studies. In high school, he was described as the,, class clown. '' Not long ago, he would have become active in the Muslim community. According to a friend Rahami visited a few years ago Afghanistan."