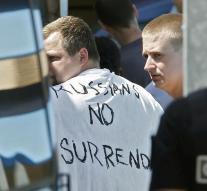 cologne - A court in Cologne, Germany has four Russian football fans sentenced to suspended prison sentences for assaulting Spanish tourists when they were on the way back from the European Football Championships in France. The case against a fifth Russian continues next month.

The Russians made about six weeks ago, a stopover in Cologne during their journey home. They were awaiting their flight into the city and went, under the influence of alcohol, looking for a fight. Near Cologne Cathedral they encountered the Spaniards, two men and a woman, who just stickers with anti-fascist texts posted on a door.

The two men were attacked and beaten.