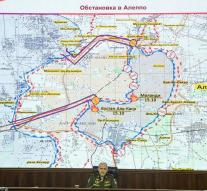 aleppo - The Russian and Syrian air force have suspended air strikes in Aleppo since Tuesday 08.00. Russian Defense Minister Sergei Shoigu said that the measure has been decided in relation to the proclaimed Thursday 'humanitarian pause'.

Moscow announced on Monday that the Russian military Thursday from 08. 00 to 16. 00 pm local time bombs and missiles will fall more on the eastern part of the city in northern Syria.

The temporary unilateral ceasefire which even the government forces of President Bashar al-Assad will abide according to Syria, from the heavily besieged neighborhoods in Aleppo, the thousands of residents should be given the opportunity to seek refuge. Also injured can be brought to safety.

The rebels who control the area, has been asked to clean up mines that are on the route to multiple corridors. According to Moscow and Damascus have Islamist insurgents and civilians the opportunity to leave the eastern part of Aleppo. opened two corridors for rebels and six civilians.

In the night from Sunday to Monday arrived by air raids on Aleppo dozens of people dead, including several children.