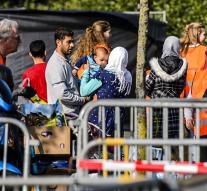 woerden - Five suspects of the storming of an emergency shelter for asylum seekers in Woerden be arraigned Friday on the magistrate . They are according to the prosecution suspected of preparing an attack on sports Faster Gate in that city. Formally faulted public violence and intimidation .

The five belongs to a group of about twenty men Friday, October 9th dressed in black clothes and adorned with balaclavas attacked the sports hall. Stayed there 150 refugees, including 51 children , in an emergency shelter.

The men threw include fireworks and eggs. Of the group of eleven men arrested, five have been sent home with an exclusion order. They may not move for a period of 90 days near a refugee center or emergency shelters for refugees. They remain suspects in this investigation.

An eleventh suspect was arrested, according to the public seems to be sufficiently involved in the action.