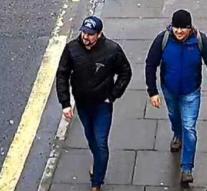 moscow - The Russian news channel RT says two men interviewed who have the same names as the main suspects of the attack on Sergey Skripal in southern England. Alexander Petrov and Roeslan Bosjirov have reported to editor-in-chief Margarita Simonyan. The interview would be broadcast in the short term.

Simonyan says that her editors were looking for the duo, but came out with the wrong people. 'In the end, the real Petrov and Bosjirov called me (as far as we can tell),' says the editor-in-chief. They would be very similar to the men in photographs that were released by the British authorities.

The British authorities say that the main suspects in the Skripal case used the names Alexander Petrov and Roeslan Bosjirov. Presumably they were pseudonyms. According to the British government, the duo is part of the military intelligence service GROe and would have tried to kill former spy Skripal and his daughter with nerve gas.

Russian President Putin said earlier that Russia had identified the duo. According to him it was ordinary citizens.