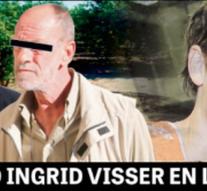 - In the third day of the trial heard around the assassination of former international volleyball Ingrid Visser and her partner Louis Severein be Thursday the three main suspects Juan Cuenca, Constantin Stan and Valentin Ion.

The trial was suspended Thursday when counsel for one of the main suspects, the Romanian Constantin Stan, fainted. 'I'm feeling good. Thursday I was very hot and when I wanted to ask for a brief recess I fainted. That is me never happened, 'the lawyer said Monday when he arrived at the court.

Monday will be first heard the main witness. The statement of the main witness, Maria Rosa, will be of great importance for the process. She was the woman who brought the main suspect Juan to Cuenca on May 13 2013 Casa Colorado, where Visser and Severein according to Justice were killed in the evening or night. Maria Rosa then jammed a short time, but is now considered the main witness. She herself made contact with the Spanish police when she saw on the television news that the Dutch were missing.

The process was delayed Monday because the main suspects arrived too late. Ingrid Visser of the mother is not present today in court.