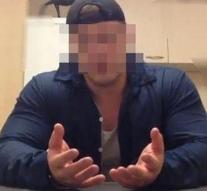 others - The 25-year-old Alexander D. of the Belgian Varsenaere who is suspected of killing his former girlfriend and her grandparents has been arrested. That is what the Belgian parquet says. He was held in a supermarket in Oostende on Wednesday.

In the Belgian village of Moere at the West-Vlaamse Giste, three people were killed on Tuesday evening. Alexander D. hit the strike on the run.

The man posted a 27-minute farewell video on Facebook and YouTube on July 22nd. In that, Alexander D. claimed to commit suicide. In English he says goodbye to his mother, sister and best friend. Then he speaks his ex-girlfriend.