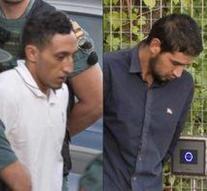 madrid - The Spanish investigating judge decided on Tuesday evening to release Mohamed Alla, one of the four suspects of the terrorist acts in Barcelona and Cambrils, for free. Two detainees enter prison and the other remains in provisional detention. That reported the Spanish newspaper La Vanguardia.

The arrested Driss Oukabir and Mohamed Houli Chemlal are unconditionally entering the cell for membership of a terrorist organization. The forrest of Salah el Karib has been extended by 72 hours.

During the attacks in Catalonia last week, the group made fifteen deadly victims.