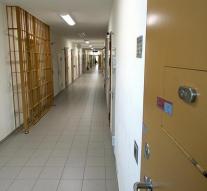 - Three weeks after the arrest of the Syrian jihadist Jaber al-Bakr who hanged himself in his cell, is arrested a suspected terrorist in Berlin. The prosecution suspects the man of having been a member of Islamic State. Research has shown that he has had contact with an IS-header in Syria responsible for plotting attacks overseas.

'Van has he been allowed him on short notice to prepare for a terrorist act against people in Germany,' the authorities made known Thursday night in Karlsruhe. There he is brought priority to the judge who must decide whether he remains in custody. Explosives or weapons were not found.

The police arrested the suspect in a house in Berlin-Schöneberg. He claimed to be Syrian and 27 years old. According to the intelligence he Tunisian who spends as Syrian war refugees. He would be repealed by a counselor in the German capital. Before that he was in a reception center at the old airport, where he was behaving aggressively, according to German media and had to leave.