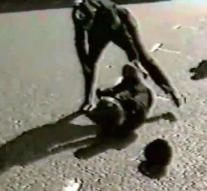 london - Britain has released a Libya arrested in 2015 because of the murder of police officer Yvonne Fletcher in 1984 at the Libyan Embassy in London. He was not charged with charges, police told Tuesday.

According to the police, there is sufficient evidence to identify the guilty, but can not be brought to justice for national security reasons. What remains is too skimpy to blame the Libya.

Fletcher was shot in April 1984 for the Libyan embassy on Saint James's Square in London. The 25-year-old agents were sent to a protest for the embassy. Opponents of the regime of Colonel Muammar Kaddafi (1942-2011) demonstrated following the execution of two students in Libya. The protests were shot from the embassy. Fletcher was hit dead, eleven others were injured.