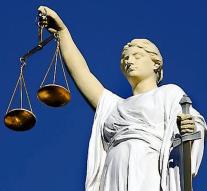 the bosch - The Amsterdammer Marlon G., who is suspected of abducting a so-called jihad bride, stays stuck, so the court decided in Den Bosch.

The 39-year-old man would have kidnapped a sixteen-year-old girl from Heesch to Antwerp, married to Islamic law and prepared her for the jihad in Syria.

The man is not only suspected of abduction, but also of participating in a terrorist organization. The girl was missing three weeks in July and August. The lawyer of G. argues that the girl lies, volunteered, but ultimately no longer wanted to return home.

The court had already suspended the suspect in front of May. But after another woman reported to him of rape, maltreatment and threatening with a knife, he got stuck again.

The intention is to deal with the case on 17 November in substance.