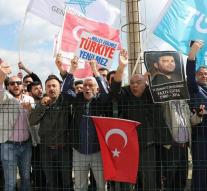 ankara - In Turkey, Monday launched the lawsuit against more than two hundred suspects of the failed coup last year. This includes the former head of the air force and dozens of generals, colonels and majors.

The suspects were led to the court next to angry protesters. They demanded the death penalty and threw with straps. At the beginning of the hearing, activists also heard. 'Bring these traitors to my son's murderers,' shouted a woman, who then fainted.

The trial takes place in a specially built court in Sincan, outside the capital of Ankara. There are a total of 221 suspects, of whom 12 are fugitive. During the coup attempt, more than 240 people came to life in July 2016, including many citizens.