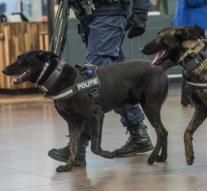 brussels - A bomb alert was issued at Brussels airport on Sunday evening. Around 19.45 suspicious pamphlets were found in the men's toilets in the arrivals zone, the federal police said.

The police felt confident and established a security zone. Additional police officers and soldiers were deployed to search the building on suspicious packages. The building was not cleared and the air traffic was not redirected.