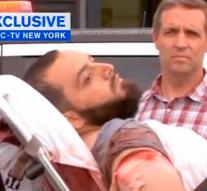 - The prosecutor has Rahami Ahmad Khan, the suspect in the bombings in New York and New Jersey, sued for the use of weapons of mass destruction and to carry out a bomb attack on public land. He would have bought components for the bomb eBay, said the prosecutor.

A thirteen-page indictment was put online. A third charge relates to the destruction of property by fire or explosives, the fourth complaint concerns the use of a weapon of destruction. The suspect, according to the prosecutor had a diary in his pocket, which he \'brother\' Osama bin Laden graces. Bin Laden was the main responsible for the attacks also Rahami blames on September 11, 2001. In his diary the United States in Muslim fighters in Afghanistan, Iraq, Syria and Palestine to slaughter.

FBI agents enter the document the findings of their research in detail again. So wanted Rahami actually a race at Seaside Five Marine Corps Semper hard hit, which at 9 o'clock in the morning would start in New Jersey go, but the race started later. The weapon would have consisted of three pipe bombs and a mobile phone as a timer to set off the bomb, but only one pipe bomb exploded.

Later in the day was in the Chelsea neighborhood in New York, a bomb off, which was made using a pressure cooker and was hiding in a dumpster. The container was nearly 36 meters hurled through the air and windows were destroyed in a circumference of 120 meters by the impact, according to the FBI.

Governor Andrew Cuomo of New York said Sunday still have no reason to believe that the arrested suspect Ahmad Khan Rahami belonging to a terrorist cell. The Prosecution considers the attacks in New York and New Jersey, however, as terrorist acts. The research has been operating as such by law, said Attorney Loretta Lynch Tuesday.