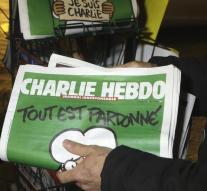 - In a US drone attack in Syria is an IS militant killed suspected of involvement in the attack on the editor of the French magazine Charlie Hebdo in Paris in 2015. It reported sources within the US Department of Defense.

Boubaker el Hakim was the end of November are slain in Raqqa, the capital of the IS caliphate.

On January 7, 2015, the brothers Cherif and Said Kouachi invaded during an editorial meeting of Charlie Hebdo and shot 12 people dead. The attack on the satirical magazine, which is often mocked religious and political leaders, led to a global solidarity movement with the remaining editors and had the motto ' Je suis Charlie '.