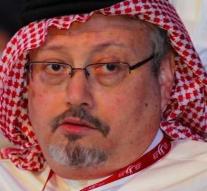 washington - A number of suspects identified by Turkey in the case of the missing Saudi journalist Jamal Khashoggi comes from the immediate surroundings of the Saudi Crown Prince Mohammed bin Salman. The New York Times writes this on the basis of facial recognition, social network profiles, media reports and leaked Saudi government documents.

One suspect was seen when he came from a plane in Paris and Madrid with the crown prince. He was also photographed when he was on duty at this year's visits to Houston, Boston and the United Nations. Three other suspects were recognized by witnesses as members of the security command of the crown prince. The fifth is a court doctor who holds a high position at the Saudi Ministry of the Interior.

US President Donald Trump said earlier that the Crown Prince assured him that the Saudi leadership was unaware of the alleged events at the Saudi consulate in Istanbul. The Turkish authorities, however, assume that Khashoggi was killed by a special commando from Saudi Arabia.

The New York Times further reported that of the 15 suspects identified by the Turkish authorities, at least nine worked for Saudi security, military or government agencies. If these people were actually in the Saudi consulate at the time Khashoggi was there, there is a direct link between the events and the crown prince, according to the newspaper.

Khashoggi went to the Saudi consulate on 2 October to collect papers for his planned wedding. He has disappeared since then.