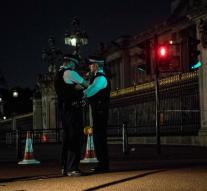 london - The man who attacked Friday night agents at Buckingham Palace had a huge sword of over a meter long. He repeatedly shouted 'Allahu Akbar' (Allah is great). That has revealed the London police.

The man drove a blue Toyota Prius to a police station with unarmed agents. When the agents claimed the man's behavior, they saw him grabbing a huge sword that was in his car next to him.

The three police officers immediately came into action and managed to overcome the man with the help of tear gas. Two agents ran a few scratches.

The man is 26 and is from Luton. The incident is treated as a terrorist act. According to the police, the man acted only. Friday evening a similar attack took place in Brussels. There attacked Somali Belgian soldiers. The man was shot down and did not survive.