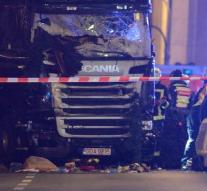 berlin - The man who was arrested after having entered the alleged attack with a truck on a Christmas market in Berlin is probably Germany as a refugee in February. Sources at the German security services have reported that on the night of Monday to Tuesday to the German Press Agency dpa.

Complete clarity is not there yet, because the suspect has used different names and identities are therefore not fixed without question. It would be a Pakistani or Afghan, according to the sources. The German newspaper Die Welt reported earlier that it would be a Pakistani.