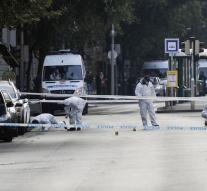 budapest - The Hungarian police have arrested a man suspected of the bombing last month in the capital, Budapest. At the blast two policemen were injured. The explosion was then surrounded with a lot of mystery.

According to the Chief Prosecutor Tibor Keresztes, the suspect arrested in the town of Keszthely. He has attempted homicide and abuse of explosives suspected.

The anti-terrorist police have found no evidence that a foreign militant organization had anything to do with the attack during its investigation.