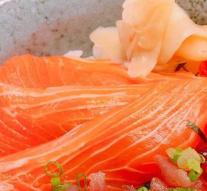 - Doctors are used to it, but sometimes they make things that they are completely amazed by. Similarly, doctor Kenny Bahn, who works at the emergency room of a hospital in the American city of Fresno. He looks back on a bizarre service in which he found a man with a mysterious plastic bag in his waiting room.

He was recently asked for help by a patient who complained of diarrhea with blood. The Asian man asked for a drug against worms, which Dr. Bahn said he had to do research first.

Then the man pulled out a plastic bag, says Bahn in the radio program This Will not Hurt a Bit. The doctor thought that there would be a jar with feces in it. He was therefore stunned when the man had a roll of toilet paper wrapped around it with a long tapeworm. 'I open the bag and see that huge, long tapeworm. He said it was coming from behind, 'says Bahn.

'The man had stomach complaints and was worried. He had diarrhea with blood and, during a toilet visit, saw something dangling from his body to make matters worse. Then he began to worry, he thought it was his guts... He became terrified of it. '

Yet the man decided to pull it. 'He pulls and he pulls and wonders what this is for long, strange thing! He grabs it, looks at it and... you will never guess. It moves. '

The concerned patient decides to take the long parasite around a roll of toilet paper and take it to the hospital. There, the doctors have established that it was indeed a tapeworm. The flat worm turned out to be 165 centimeters long.

The man himself thinks that his sushi addiction- and in particular his love of raw salmon- has caused the parasite to enter his body.