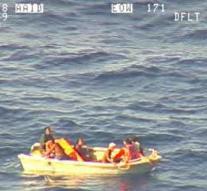 wellington - Seven crewmembers of a ferry disappeared in the Pacific were found in a lifeboat by the crew of a plane of the New Zealand Air Force and were brought on board of a fishing boat on Sunday.

The seven were passengers on a wooden catamaran with about fifty people on board in the island state of Kiribati. This boat departed from the island of Nonouti on the 18th of January to the 260 kilometers north of Betio where the vessel had to moor on January 20th. But that never happened.

Australian a New Zealand media reported that the search for possibly another sloop with survivors is continuing. The disappeared catamaran was reportedly equipped with two lifeboats.

Kiribati is a republic of coral islands that are spread over a colossal stretch of the Pacific Ocean, but together they are less than 800 square kilometers and count only 110,000 inhabitants.